Posted on 17 Jun 2015 in architecture, maneuverability

There's a well-known architectural style in desktop applications called "Components and Glue". The central idea is that independent components are composed together by a scripting layer. The glue is often implemented in a different or more dynamic language than the components.

The C2 wiki's page on ComponentGlue has been stable since 2004, so obviously this is not a new idea.

Emacs is one example of this approach. The components are written in C, the glue is ELisp. (To be fair, though, the ELisp outnumbers the C by a pretty large factor.)

Perl was originally conceived as a glue language.

I think Components and Glue is a relevant architecture style today, especially if we want to compose and recompose our services in novel ways.

My last several posts have been about decomposing services into smaller, more independent units. Each one could be its own micro-SaaS business. Some application needs to stitch these back together. I often see this done in a separate layer that presents a simplified interface to the applications. 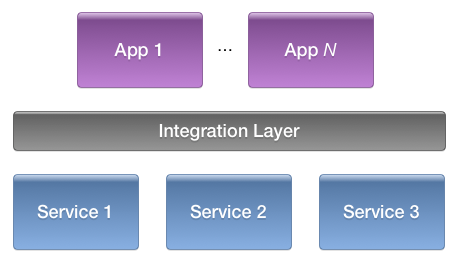 We embrace plurality, so if there's one glue layer, there may be more. We should allow multiple glue layers, where each one is adapted to the needs of its consumers. That begins to look like this: 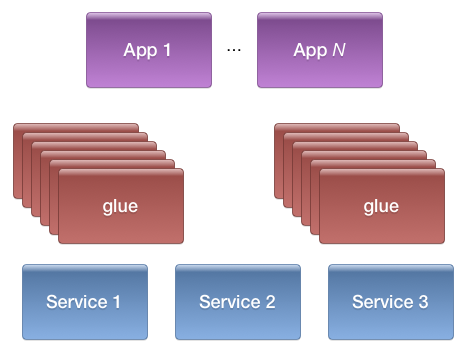 The smaller and lighter we make the glue, the faster we can adapt it. The endpoint of that progression looks like AWS Lambda where every piece of script gets its own URL. Hit the URL to invoke the script and it can hit services, reshape the results, and reply in a client-specific format.

Once we reach that terminus, we can even think of individual functions as having URLs. Like one-off scripts in ELisp or perl, we can write glue for incidental needs: one-time marketing events, promotions, trial integrations, and so on.

"Scripts as glue" also lets us deal with a tension that often arises with valuable customers. Sometimes the biggest whales also demand a lot of customization. How should we balance the need to customize our service for large customers (the whales) and the need to generalize to serve the entire market? We can create suites of scripts that present one or more customer-specific interfaces, while the interior of our services remain generalized.

This also allows us to handle one of the hardest cases: when a customer wants us to "plug in" their own service in lieu of one of ours. As I've said before, all our services use full URLs for identifiers, so we should be able to point those URLs at our outbound customer glue. That glue calls the customer service according to its API and returns results according to our formats.

The components and glue pattern remains viable. As we decompose monoliths, it is a great way to achieve separation between services without undue burden on the front end applications and their developers.